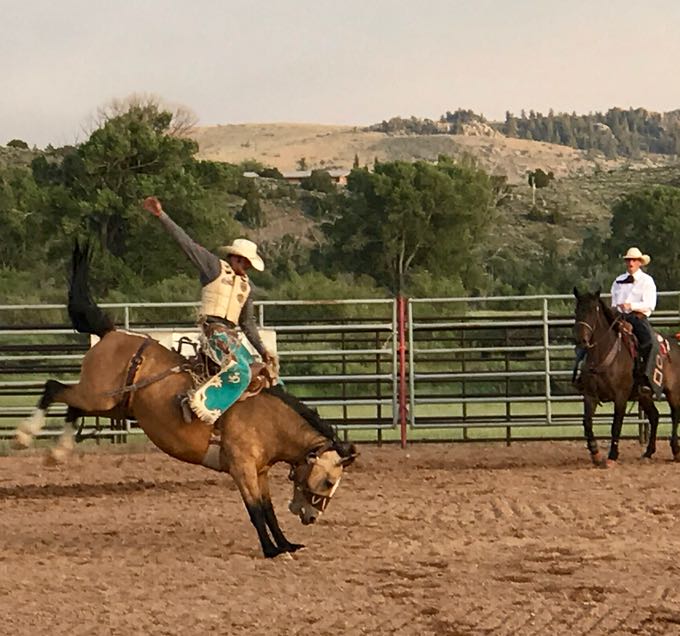 The American West holds such allure and magic. In my Pollyanna mind I picture regal native Americans aside good natured cowboys on their chestnut and paint steeds, buffalo and bald eagles and bear and moose, all loping respectfully across the plains, woodlands, and snow-topped mountains. As Fred and I headed West this past week, my heart leapt a little bit at the spectre of leaving the confined spaces of the east coast and heading to the wide-open welcome of the west.

Our first stop was the new Denver airport. I suppose it is not now new—maybe it’s 20 years old?—but it was truly new the last time I passed through. I was going to Aspen then and the baggage system was a mess. I remember ski cases and suitcases piled to the sky, while a bewildered traveller pointed to the bottom of the heap and said, “that’s mine”. This time the Denver airport is probably one of the nicest airports I’ve seen. It is light-filled, thanks to the white tent-like structures that cover the roof, which I suppose are meant to resemble the Rockies. This time we zoomed through baggage claim and received our rental car zippity zap.

We hit the road and headed for Saratoga, WY, to meet my parents. For a while they’ve made an annual trek there and I’ve heard stories of their Old Baldy Club. I knew it was a bit off the beaten track, and although I was told that golf and fishing were its only pursuits, and I was not a sportsman in either, I knew I could not pass up a visit. I’ve visited Wyoming a few times before and it is wonderous. Not big sky country like Montana, but more expansive tumbleweed space. Cowboy country.

So we headed north. We reached Laramie WY and detoured to a liquor store (one has to have priorities) and then asked where to eat lunch. We were referred to a burger place on the train tracks called “Born in a Barn”. It was cute and the people were nice but somehow I didn’t feel born in a barn nor did I necessarily think my burger was either. The restaurant was still atmospheric, but there were more sedans than pickups in the parking lot outside.

We continued to Old Baldy. Old Baldy is a lovely private club that grew out of one man’s vision who spent his winters in Lyford Cay, New Providence, Bahamas. He had some money and thought his friends needed a place to go in the summer. His vision in the mid-1960s became Old Baldy. He built a golf course and sited the club on the N Platte river, known in part for its fly fishing. I could just hear him saying, “Golf and fly fishing, that’ll entertain ‘em!” It’s reasonable luxury in the middle of the Wyoming plains.

We had a great time at Old Baldy. I kept looking for wildlife, but I only saw a stray antelope or two, some geese, and common birds that looked like crows but with white on their wings. One night Fred thought he heard a moose–sure sounded like a moose. But upon closer examination in the light of day, it was a boisterous cow from the pasture below. The last full day we were there we went fly fishing. The road to the aluminum skiff launch was rocky and full of potholes. I felt I should be on Eleuthera. It seemed so remote it didn’t seem a long shot to see a bear or a mountain lion or even a moose making its way to the river for a drink. When I saw nothing and thus inquired to our guide about wildlife, I was told that ranchers viewed bears and mountain lion as threats to their herds, so mainly the big guys quickly passed through on their way to safer ground. I wondered where were those safer grounds.

Our trip down the river was quite nice. The sun rose and shimmered off the clear water. We peered through polarized glasses looking for trout as our inexperienced arms feebly cast hand-tied flies through the air, hoping they would land and sink and somehow become irresistible to the fish. We both caught a couple small, maybe ten-inch trout, two brown and a rainbow, and then there were the ones that got away. Of course we released them all, little beautiful critters who were stupid and didn’t know they were going after something that was false. We saw a couple of does grazing on the river bank, unfazed by us, and the greatest site of two majestic bald eagles, perched on a limb overhanging the river. As we watched the bigger one raised his stunning wingspan to the sky and soared away, while the other studiously watched us as we bumbled along the babbling river.

I was still in search of Western wildlife. I’d learned my lesson, obvious now, that in Wyoming, ranchers fenced and protected a whole lot of expanse. As we left Wyoming and moved into Colorado, that reality was much worse, in a looking-for-wildlife-sense. All of a sudden all the ranches were turning into pre-fab housing communities. We’d see one ranch in one mile, then one community called something charming like “Flowering Ranchside Estates” in the next. I wondered out loud if these new houses would last more than 10 or 20 years. Fred succinctly commented that they were not “generational houses”, i.e., no one would have to prepare them for their kids’ inheritance.

We did see one fox on the way to Boulder. The irony of the fox sighting was that we saw a very similar fox in the dim light of dawn on our way to the airport in Rhode Island, just a few days prior. We detoured briefly in Fort Collins to visit with my nephew. Fort Collins is a tidy, friendly college town, home of Colorado State University, a flat expanse surrounded by the foothills to the Rocky mountains. As we finally rolled into Boulder, Fred began to happily reminisce. He went to University of Colorado in the 1960s and met his late wife there even before their Freshman years began. This was to be a stroll down memory lane for him, and I felt privileged to be along for the ride. My thoughts of wildlife in the West were now a burst thought-bubble. I asked Fred where he’d like to go to dinner that evening. He responded he remembered a place called “Flagstaff House”, which he doubted was still there. Through the magic of Google I found it, and we made a reservation.

That evening we briefly drove on a windy road through the Flatirons section of the mountainous hills that border Boulder, traveling only five or seven minutes through a government-protected area. There were a few houses here and there but mainly there were trailheads and stunning views of the city below. We reached the restaurant and gave our car to the valet. I’d now read a bit about this dining spot on the internet and had learned that it was “all about the view”. I’d also read that the restaurant was very expensive, good for special occasions, one “not to pass up when in Boulder”. Well, here we were.

We were shown to a table in the third row, peeking out at floor to ceiling windows overlooking panoramic vistas. The surrounding hills rolled down to Boulder like the red carpet at the Oscars. Ours was not a horribly-placed table, but the room was not crowded and the “good” tables quickly emptied. After a series of somewhat comedic circumstances, we ordered extravagant food and wine. We then managed to move to a table with a direct view, but on the way lost our bread and water (there is some poetic meaning there.) We finally settled down and enjoyed our somewhat okay but certainly not wow! meal. (Note to self: when travelling, don’t go to the trendy restaurant that has a buzz on the internet, or that was just written up in a national magazine, or was recently featured on a TV show. People are lemmings. Crowds and popularity don’t contribute to a consistently good meal. Double this advice if the restaurant has a view.)

So Fred and I exited stage left after paying our hefty bill, two of the only diners left in this stunning glass oasis on the hill. It was only 9:30 but apparently most call it an early night on Sunday in Boulder. The valet actually had waited for us, and he ran up enthusiastically to fetch our car. I was more than a little surprised to see him then come running back up the hill, shaking as he sputtered, “Can’t get your car. Bear by it. A big one.” He disappeared into the restaurant and I looked down the hill. Sure enough, there was a large black bear hunkered down by our car, dimly visible through the dark. I tried to take a picture (isn’t that what we all do now, whip out our cell phones and fumble to turn on the camera? Danger be damned!) Just then what seemed to be the whole kitchen staff ran out of a downstairs door shouting and waving their arms. The bear sauntered off. I was told as we finally claimed our car that “their dumpster was so smelly” that it sometimes attracted bears.

We shifted the car into Drive while my heart still pounded from the experience. We gingerly crept onto the winding road that leads back down into Boulder. And we had to stop. Because Momma black bear was leading Baby black bear down the hill and across the road, right in front of us. It was a tender and moving scene, one I’d hoped to see in Wyoming but never dreamed I’d see in Boulder.

As the mother – cub duo disappeared into the brush, I became aware of the car radio playing Simon and Garfunkle’s “The Boxer”. I tuned in for the last verse:
In a clearing stands a boxer
And a fighter by his trade
And he carries the remainders
Of every glove that laid him down
And cut him til he cried out
In his anger and his shame
“I am leaving, I am leaving”
But the fighter still remains.