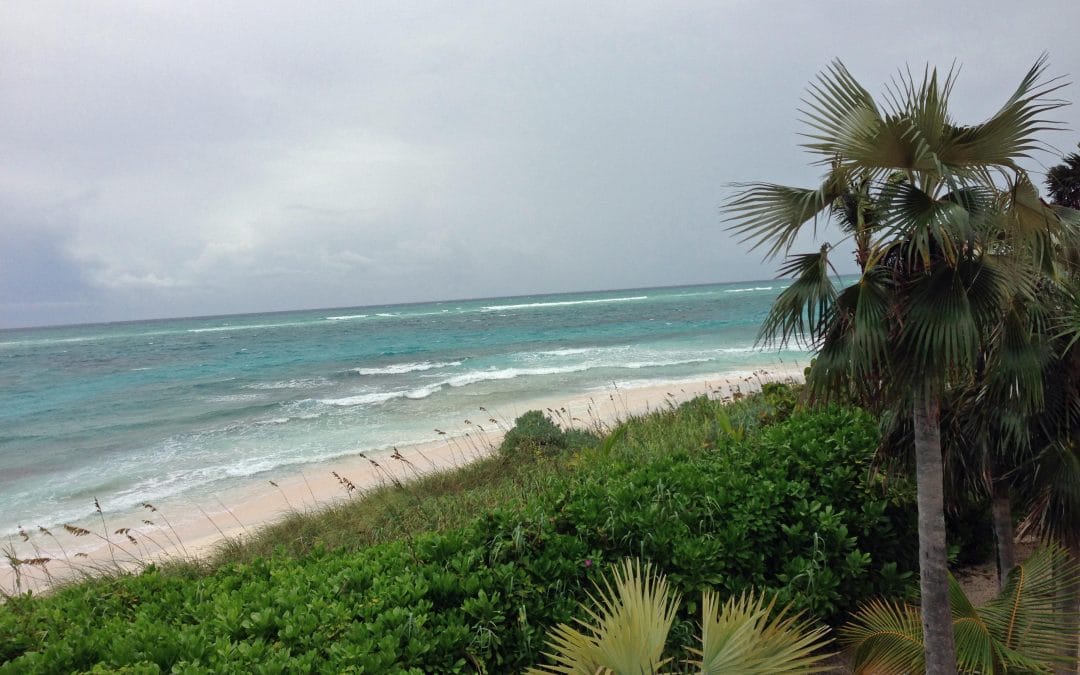 Fred and I came back to Eleuthera last Friday and it was a triumphant homecoming. We’d been gone five months and that was w-a-y too long. It was hot here. Really hot and steamy. Perhaps that should have been a harbinger.

We glided along for three days, so happy to see turquoise water and smiling faces. As Fred said when we waved at a guy walking up the hill in Gov Harbour…”his smile cannot compare”. It’s that grin and genuine happiness from which other cultures could learn; it’s just one of many reasons we love the Bahamas.

We were feeling particularly dog-less, so we agreed to foster a little potcake from Cupid’s Cay who had some complications during spay surgery. She’s only a little over one year old and has already had one litter and maybe more. She was predominantly homeless but not completely; communities take care of their own. Still, she had no roof over her head, no medical attention, and didn’t know where to look for her next meal. The first two nights she slept on our deck without moving. Then in the middle of the second night she hopped the gate and was gone. There is more to this potcake tale but suffice it to say that Cupid is back with us and the three of us are in this together.

Then we learned of Invest 99L. Just some disturbance south of Jamaica. It’s too late for a hurricane now, right? Ummmmm, apparently not. And then, guess what, the impending storm was named after my brother of all things! SANDY! Ugh…is he just teasing me again?

We weren’t too worried about Sandy today. But now s/he has turned into a hurricane supposedly headed directly to Eleuthera. We are starting to see more boarding up of houses and businesses. We went to Tippy’s at 8:00pm for dinner and they were closing. Peter, the owner of Tippy’s, was kind enough to give us a pizza to go but they are definitely closed tomorrow. They plan to reopen Friday night or at the latest Saturday. They are boarding up.

Gov Harbour airport is closed Thursday and Friday. Not sure if that’s the domestic terminal or international or both. The wind is whipping around but the rain is still intermittent. When it rains, it rains hard, a sheeting rain that sounds like a hose against the northeastern windows. Island electricity has gone off three times in the last four hours but has come back on fairly quickly. Our generator had trouble firing up the second time and we still had time to get a new battery…phew.

It seems to be a hurricane, not a tropical storm. Feels that way. So here we sit, awaiting our second hurricane in two years. I suppose that is of significance considering that neither Fred nor I had ever gone through a hurricane prior to Irene, last year. Thanks to Fred we’ve got back ups for our back ups and we’re here, waiting, recording, thinking, living. We’ll keep in touch.