The Power of a Lab 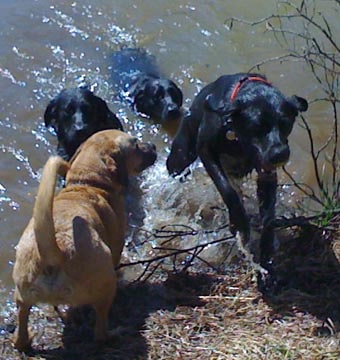 A while back I was fortunate enough to spend several years at a farm about an hour east of Atlanta. When I first starting spending my weekends there I had Chimo, a half Malamute – half black Labrador Retriever, and Grouper, my yellow Lab. Chimo grew older and finally left me…it was the best thing for her and I learned to move on. My first thought was to have Grouper as an only-Lab, but she hated that idea, so I found the need to adopt another dog. I’d always wanted a black Lab, so I set out on the course to find one.

I somehow found a family in North Georgia with black Labs for sale. They had both parents on site, they were a family and not a breeder, and the father dog was a field champion, which meant he was a really smart dog. To top it off, the family’s last name was Black, my last name is Black, and of course the dogs were…black. I set off to check these dogs out. When I arrived, all the really amazingly cute black Lab puppies were running around in the back yard. There was one who walked on top of a log in a balancing act with a stick in her mouth. I sensed she was mine and she came home with me.

We got home and I had no idea what to name her. I’m big into names–I think they set the tone for the future. All I knew was that this dog had a lot of black in her background, and boy, did she have some enthusiasm! So I pulled out the “5000 Names for Your Baby” book and looked up the word black and found Kali–black princess of energy. Perfect. Kali it was. I had no idea I had named my dog after a sacred Sanskrit goddess until a couple of years later.

So Kali and Grouper and I started spending time in the country. Kali had boundless energy and wonderful determination. Grouper was getting old, but still loved running the 30 acres or so to the stream, hopping in and swimming. One afternoon, the three of us set out for the stream named the “Little River”. The owner of the farm had told me to be careful because if it rained a lot, the “little river” would become gushing water. Uh huh, I thought. It had rained a lot recently as Georgia does on occasion, but the dogs and I walked to the stream as always. As we reached the hill leading to the delta, Grouper took off for the stream so she could enthusiastically jump in. Kali followed.

I crested the hill and saw the Little River. It was surging–a mass of rushing brown water. Grouper was caught on a pile of debris in the middle of the river, bobbing up and down, gasping for air. I couldn’t let my dog die. I jumped in the water–it was very cold as it was January–and immediately my knee high rubber Barbour boots filled with water. My fleece jacket saturated and became heavy. I made it to Grouper and she batted at me with her two front feet, pushing me under the water. I managed to shove her free from what enslaved her, but in doing so sunk further beneath the water. I’m a good swimmer but I could not battle filled boots and weighted clothing.

The only thing I could think as I dropped deeper into the brown water was not to panic, they taught me in scuba diving class not to panic. I knew I was being hurled into the debris, but there was nothing I could do to stop the force.

The next memory I have is floating on the other side of the obstruction. Kali, my little puppy, was soaking wet and swimming next to me. She was my shadow. It was hard, but I swam against the current, very tired, and pulled myself up on shore. I was shaking. I took off all my clothes and twisted them until they were as dry as they were going to be. Kali and Grouper and I set off up the hill to the house and the fire.