The Day After Irene on Eleuthera 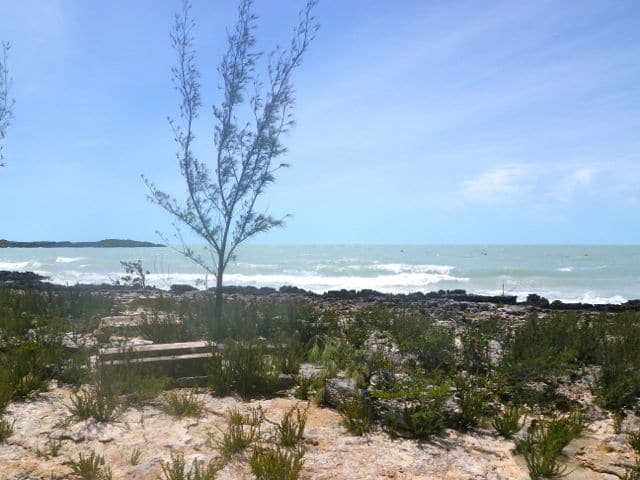 It’s the color of the water on the Caribbean side. The Atlantic side has bounced back a bit, and under blue skies this afternoon it was characteristically turquoise and many shades of delectable blue. Every time I’ve seen the Caribbean sea today I’ve tried to figure out what to call the color–minty tan, maybe? The photo included with this post is of that water. Regardless of wording, it’s a constant reminder to me as I drive up and down the island that things here on Eleuthera aren’t the same since Irene.

Today I drove to the Governor’s Harbour airport to check whether flights are coming in and out. Fred and I were booked on the Gulfstream flight to Fort Lauderdale tomorrow but could get no clear guidance whether they were flying yet. I found the international terminal dark (well they’re all dark–no power) and the ticket agent and security person were all by themselves. They said the issue with international flights (i.e. to the U.S.) is that they can’t contact American customs since phones are down and there is no cell signal at the airport. The fact they don’t have power isn’t an automatic deal killer as far the U.S. is concerned, they said. If someone in authority (whomever that may be…Lord knows not me!) told the FAA everything was ok they’d still fly. These necessary things include the runway needs to be clear and the fire truck needs to be manned and readied.

So then I went to the domestic terminal. BahamasAir is flying (supposedly–I didn’t see a plane). The Pineapple Air agent said she was expecting a flight in shortly, but they have no communication either so really she had no idea. She did say that by tomorrow it should all be sorted out. We have faith in this statement and are booked on Pineapple Air to Nassau tomorrow.

I left the airport and drove slightly south to check on the possibility of getting a propane refill for the generator. I had to wait a bit for the proprietor to finish some business, so Turtle and I walked to the adjacent beach. That’s where I took today’s photo of the water. One thing that continually strikes me with the beaches is how much seaweed is everywhere. The Atlantic beaches have seaweed, this Caribbean beach had seaweed, where the storm surge covered the road there is seaweed. There was a small red wooden boat on the road, about 1/4 mile inland, leading to this little beach. I guess it had been carried there in the storm. It too was surrounded by and filled with seaweed.

From there I drove to Palmetto Point and then to Savannah Sound. There are electric lines dangling over Queen’s Highway in several locations. I saw lots of industrious Bahamians everywhere: in Governor’s Harbour clearing downtown of sand and seaweed, along the road clearing debris, Batelco and BEC trucks mending and carrying this and that. It’s hopeful to see such signs of a return to normalcy.

Cell phone coverage is very spotty. Some areas show no service but a short walk across the road yields one bar. Two bars are reason for celebration. Communication on the island continues to be a challenge. Not only do the great majority of landlines not work, but only a handful of people with generators have power and can charge their cell phones.

The destruction on the island is more widespread than I thought. Twice today I had conversations with men who were standing on their roofs with hammers in hands. Roof damage is probably the most common effect of Irene. Fallen tree branches and trees on houses is also a problem. The really big beautiful tree on the Atlantic side of Palmetto Point near Banks Road lost several limbs and pretty well decimated the house below it. Tamarind House in Governor’s Harbour, named for its prominent Tamarind tree, has now lost its namesake. Fortunately the majestic tree fell away from the house.

We don’t know if we’ll be able to get on a plane tomorrow. I am ambivalent. There is a powerful energy on Eleuthera, that of rebirth and determination. I hate to leave it, if only for a little while. We’ll be back soon.

← Irene–Thursday Update (nearing the end, I hope) An Escaped Herd of Horses →