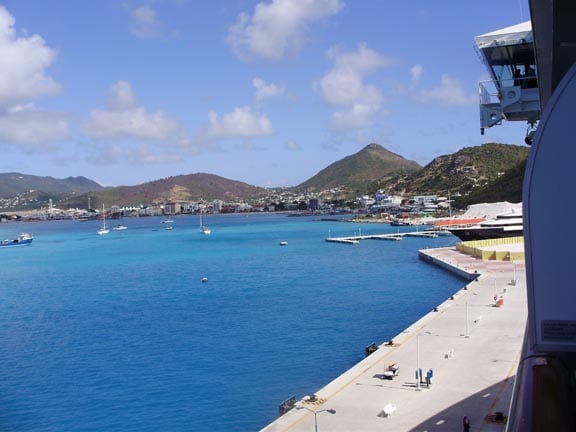 Lots of really large boats leaving this lovely harbor in St. Maarten, the dutch side of the Caribbean island in the West Indies…they are all cruise ships and the sunset beckons. I am sitting out on our little stateroom balcony, relishing the changing hues of the water as St. Maarten fades behind us. So strange I am here…I have been trained to feel that masses of humanity equate to a negative…it is the unique that makes one’s journey memorable.

So we exit the ship this morning and walk into a man-created never never land. We walked around looking for the town, found ourselves facing a tinseltown equivalent, and then found the road again. At that point it became necessary to buy a beer. A Carib. And the person selling the beer rewarded my companion Christopher an extra dollar in change for selling a beer to another guy on the street–I knew then I was going to be ok. Islands are all about people and it seemed we stumbled on a good one.

We caught the bus and headed to points north, or somewhere, not really sure it was north. Christopher had two beers in his backpack and thought perhaps he should open them–but how? He walked up to the front of the bus and asked if perhaps the driver had an opener. Um no. But a fellow passenger offered to open the beers himself. Christopher was so amazed that the guy opened the beers with his teeth. Well, that’s the Caribbean. One uses what one has on hand (or in mouth, in this case).

We exited the bus at the marina on the French side–St. Martin, and found the restaurant we wanted to find, a delightful spot named Tropicana, perched on the side of the concrete docks. It was really something. Wonderful, creative food, lots of boaters, and perhaps the best homemade banana rum I’ve ever had. The dark syrupy rum with bits of marinated banana in it came gratis at the end of the meal, set on our table in a Gray Goose vodka bottle. I’d forgotten what fun it is to be around boaters and island people. I had a conversation with one couple about Staniel Cay Yacht Club in the Bahamas (I had on the t-shirt), and we sat next to a woman who lived on Anguilla, the charming island next door that I visited several years ago. She was with a nice guy from Naples Florida who said he’d come to meet his companion and to stay for three days. He stayed for three weeks. I can understand that. The Caribbean sucks you in and envelopes you in its warm embrace.

Walking back down the road in St. Martin we saw a tiny cave of a saloon and ducked in for a drink. It hosted a smattering of locals sitting at the bar. We joined them and asked what kind of dark rum did they have? The bartender spoke French and apparently not English, and she brought us scotch, then bourbon, and finally a lone bottle of Brugal rum. We drank a couple of rum and cokes and joked around with the locals in the dark respite from the strong winter sun. We never met a person on either side of the island who did not smile and laugh and speak in warm tones with that wonderful lilting accent.

Looking out now at deep blue seas again. Lots of people on this ship, many of them sitting on their little private balconies reliving their own thoughts from the day. I am just one more. But we had a grand time and at least in my mind got to experience the soul of St. Martin/St. Maarten. Thanks.

← The Power of a Lab Return to Little San Salvador →