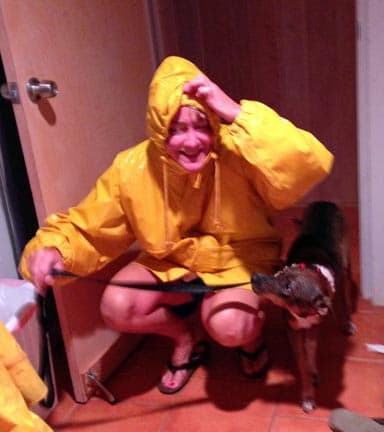 When we went through Irene last year I never thought of that experience as a training exercise. Both of us agreed we’d never voluntarily go through a hurricane again. But Sandy kind of crept up on us. We planned two weeks on Eleuthera to get the houses ready for Fred’s family at Christmas, to walk on the beach, to play tennis, to renew friendships. But instead we prepared for a hurricane named after my brother that was supposed to be just a tropical storm.

Most of today was spent preparing on fairly short notice. We lowered the hurricane Kevlar shades and bolted them down. I pulled up all of the rugs and moved the furniture to the center of each room. We lined the windowsills with towels, brought additional towels over from the other houses, and grabbed sturdy yellow slickers from the boat barn. These were all things we learned were necessary from Irene, and it was a lot easier to do them at our leisure than at one in the morning with water flowing between our toes.

The wind really started blowing in the morning. It rained intermittently, although last night the rain covered our eastern windows like sheets. There were enough breaks in the rain that we could take the dog out or walk next door without getting soaked. Still, the wind was blowing hard enough that a simple act of standing on the deck facing the ocean, drill gun in hand to tighten shade bolts, required leg muscles and balance.

We went into Governor’s Harbour around noon. Most everything was closed but there were a good number of folks milling around. We watched the Gov Harbour police moving out of their station. They had Kalik boxes full of probably desk equipment and files, all stacked in the police van. They were towing a car that didn’t work. The police station is very near the harbour and after Irene it was half underwater.

Burrows market and liquor store, now under one roof on the Queen’s Highway, was open and bustling. No bread…just like Atlanta before a snow storm…really, do people sit around during Mother Nature’s disasters and eat a lot of sandwiches? Otherwise we got everything we needed. There was a sense of determined optimism, a checking-off-the-list sort of mentality. They’d all done this before, knew they’d emerge ok, not looking forward to the cleanup but at least the water and wind would be gone.

Coming back home we ate some lunch and Fred’s contractor Troy Sands showed up unannounced, asking if we were alright and did we need anything? Fred spent the better part of several hours with Troy and his helpers battening down what still was left to protect. It was very nice of Troy to come by and just one example of how everyone helps those they can during a hurricane. Getting through a hurricane is a community effort.

Finally the preparations were done and Sandy started to show his/her strength. I think for the purposes of this blog I will just call Sandy a “him” since I can’t separate the name “Sandy” from my brother. Anyway, Sandy started to blow harder, and the rain really picked up. We napped a little and read a little and at 5:00pm I knew I had to feed Cupid and take her outside. Taking her outside was an adventure. I felt like Jim Cantore on the weather channel, except that I didn’t see any video cameras. As I approached the beach the winds were so strong that Cupid, probably wisely, would not go any further. It was high tide and the water lapped the dune grass. Cupid brilliantly did her duty—what a pup!…even in a hurricane!—and Fred let us in the downstairs door. Just opening and closing the door takes two people.

We still have power thanks to the generator and Cable Bahamas hasn’t let us down yet…we still have internet and TV. Sandy is just touching us with his inner circle…apparently he is over Cat Island now and that means we’re next. We’re hoping he turns a bit more to the east as that would help us directionally with the wind. It’s going to be a long night.