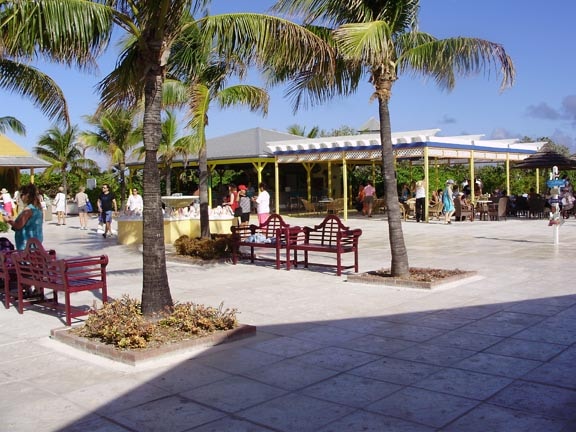 A tenuous dawn bathed our little cabin on the cruise ship with a gentle light, and my eyes opened. I hadn’t slept well that night, I don’t know if it was something I ate for dinner or the excitement of being in the Bahamas again, but regardless I had butterflies in my stomach and that kind of mind racing anticipation of a kid on Christmas morning. I got out of bed and walked out on our balcony and leaned so I could see in front of the ship–no land in sight. We were supposed to anchor at Little San Salvador at 8:00 am, it was only 6:00, so I crawled back under the covers. Next thing I knew I could hear the anchor chain click clacking and the vibration of its descent. We were here.

I hadn’t been back to Little San Salvador, a tiny and previously uninhabited island off the southern tip of Eleuthera, since 1992. At that time we loved it for its crescent shaped pristine pink-hued beach, fine snorkeling and spear fishing along the outer reefs, and fascinating land and water explorations that yielded discoveries of a shark breeding ground, myriads of native birds, and ruins from stone Bahamian cottages tucked away in the hills. Several years later I heard that a cruise ship company bought the island and turned it into their own playground, which sounded like a pity to me, but I was selfish and used to having it all to myself.

Life meanders and dips and turns and it’s always interesting to see what tricks it has in store for us. In my case, I don’t particularly like big cruises and never dreamed I’d be on a ship owned by the company that bought Little San Salvador, much less about to throw on a swim suit and take a tender to shore. Holland America renamed the island Half Moon Cay, which really wasn’t that bad of a name since it rather romantically and succinctly conjures an image of West Bay in which we were now anchored.

We joined several hundred of our fellow passengers on the tender. The diesel twin engined boat, “Rookie”, was rather endearing to me as it flew the Bahamian flag and had that rustic not-quite-up-to-American-code essence to it. The paint flaked a bit and the plastic stencils on the back of each row of seats didn’t make perfect sense; ours read “Li e acket und r s at”. I could hear the pilot up at the front talking to a couple of deck hands. They were all Bahamian and it sounded like they were having a lot of fun. Bahamians are good at having fun.

We left the side of the cruise ship and chugged toward the island. Half Moon Cay’s new owners blasted and dredged a passage through the rock jetty on the south end of the bay. They did a clean job and it looked like it had always been that way. The narrow canal widened into an interior harbor ringed by wide concrete decking. There were a couple of protruding wooden docks and two or three brightly colored small house-like structures. We could see an orange arch of some kind rising above the palms. The total effect was very down to earth and Bahamian, comfortable and not overdone.

We walked toward the orange arch, the focal point under which one passed to enter the Half Moon Cay experience. It proclaimed itself “Fort San Salvador” which I immediately liked; the history of the island hadn’t been completely lost. Fort San Salvador was the hub for all on shore activity. Shore excursions met to the left, there was a jewelry booth/store to the right, and further in the back on the right were a smattering of t-shirt and straw booths. We gravitated to the back and looked at the offerings: “It’s Better in the Bahamas”–“My Grandpa visited the Bahamas and all I got was this lousy t-shirt”–“Smile, you’re in the Bahamas”. All the same t-shirts they offered for sale on Eleuthera ever since I could remember were still being sold today.

I talked to one of the women manning the booth and asked her if she lived on Eleuthera. “Yes”, she replied softly. Bahamian women have a shy demeanor when talking to strangers that belies their considerable friendliness and inner strength. I explained that I spent quite a bit of time on Eleuthera growing up and asked her where she lived. “Deep Creek” was her answer. She asked me where I spent time and I answered Tarpum Bay and Governor’s Harbour. “How are things on Eleuthera now?” I asked. She shook her head and told me “Bad. Times are tough. Few jobs. Economy is slow.” I thanked her, my friend bought a couple of t-shirts from her, and we moved on.

Over the course of the next few hours we dragged lounge chairs to the water’s edge and reveled in the Bahamian sun, walked the freshly manicured and raked beach, took a dip in the startling beautiful turquoise water, and bought a Red Stripe beer in Captain Morgan’s Spiced Rum Pirate Bar (Kalik? What’s Kalik? The bartender was from the ship and had no idea that Kalik was the Beer of the Bahamas). The bay is so large and the beach so long I didn’t feel crowded although there were probably close to a thousand other people milling around.

Tiring of the sun we took off down a paved road, sandy with the occasional pothole, a road that could be anywhere on Eleuthera. We didn’t pass many people. There were oversized trucks that rumbled by quite a bit, like Army trucks, designed to carry people who wanted to explore the island without walking, I guess. Most of them were empty or with only a couple of people in the back. It seemed that most passengers were content with the beach. The road had occasional knee-high signs (they would have been difficult to see as a passenger on the trucks) with fun-filled facts about the Bahamas: “The average temperature in the winter is 70 – 80 degrees; the average temperature in the summer is 80 – 90 degrees.” “Hurricane season is June through November”. “The Bahamas was a British commonwealth that established self-government in 1964, and full independence was granted on 10 July 1973.” I liked the signs and appreciated that an effort was made to educate visitors about the Bahamas, hopefully creating awareness that one was in a proud country and not on a random deserted island somewhere between Puerto Rico and Florida.

There was a self-proclaimed “nature trail” that led into the brush. The trail was manicured in just the right manner as to seem very natural. It would have fooled me except that I’d lumbered through that Bahamian maze of green and silver before and I knew what slow going it was then. We reached a couple of forks in the road and I just kept heading up. The Bahamas is a very flat country and there are very few “ups”, and those that do exist don’t last for long and of course have to then head down. We passed some ruins I remembered from when I explored before. Who lived there? Why? Wasn’t it hot and buggy in the brush? We ended up at the lagoon in which we dinghied around years before, the one in which I was thrilled with watching hundreds if not thousands of tiny sharks getting acquainted with life. My friend made the mistake of stepping off a rock onto the “beach”, except that it wasn’t sand, it was an effective mixture of stinky ink-colored mud and sand that sucked him in–Bahamian quicksand. I grabbed his arm and prevented him from disappearing forever (or so it felt at the time). He laughed about it and we hiked back up the hill and out, pausing to wash his feet and sandals next to the “Sting Ray Experience”, sort of a fenced bay-jail for stingrays where, for 30 or 40 dollars, you could swim next to the rays and touch them.

We walked back to Fort San Salvador and ate at the buffet the cruise ship had set up–I forget what they called it, something like Island BBQ. Groupings of 15 or so large picnic tables were strategically placed around the area, hidden from each other by Bahamian brush and palm trees. I ate a burger and baked beans and my friend had ribs and potato chips and corn on the cob and fresh fruit. A couple of kernels of his corn fell to the ground and as he went back to get more fruit, a tiny days-old black chick tottered over to claim them. His mother hovered in the background.

We wandered around for another hour or so and saw horse stables from a distance and recorded a couple of videos. It wasn’t difficult to feel like we were on a deserted island, and overall I was feeling pretty good about Little San Salvador’s changes as we walked back to the tender. It was commercial, but Holland America had done a very good job of keeping Bahamian flavor. I saw many Bahamians working there, from the t-shirt woman to the tender pilot to security personnel. Eleuthera doesn’t have many job opportunities outside of tourism, and Half Moon Cay seemed to be a decent enough place to work.

We were almost back to the tender when my friend said “Look there!…Do you think he’s sleeping?” I looked and it was the little black chick on the edge of the walk. Someone in the crowd had apparently crushed his wing and perhaps his feet, and he didn’t seem able to move. His mother still hovered behind him. I was powerless to help him. I knew I couldn’t take him back on the ship. My only hope was that once our ship carrying 2600 crew and passengers headed back to Florida, a Bahamian would take care of him or perhaps nature would help him herself.