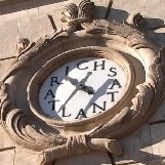 Moving to Atlanta from New Orleans in the early 1980s, freshly graduated from college, I knew I had to find a job. It wasn’t a great job market…probably not all that different from today. I was staying with family friends and filling out applications all over the city. I wanted to do something in communications–writing, public relations, graphic design/layout (pre-computer we did it by hand!). Somehow I got hooked up with the Corporate Personnel department at Rich’s. I had an interview one early summer morning and I donned my spiffy blue Brooks Brothers suit and headed downtown.

I found the entrance to the parking garage and negotiated its low ceilings and spaghetti-like turns. I parked and walked into the door closest to me. I was told to go to the 6th floor of the Store for Homes, and I would find the Corporate Personnel department behind the book department. Huh? The Store for What? Through a combination of asking questions, wandering around and sheer luck, I passed through lingerie, Finale on Five, found a bridge, crossed it, saw lots of TVs all lined up for sale, took an escalator, saw the Magnolia Room restaurant, found the book department, and there it was–a door that said “Corporate Personnel.” A-ha!

I interviewed with a couple of people, and somehow ended up with a job. Honestly I wasn’t sure what I would be doing, but I was told that every corporate job opening would come across my desk, and I would be able to choose whichever job I wanted. What that really meant was that I was the receptionist for three recruiters. I was happy to have a job, it was pretty easy and social, and I liked the people for whom I worked. I made $9 an hour. But the best thing about it was that I could wander the 14 floors that comprised the downtown Rich’s.

As three or so months ticked by, a job opening was posted that was just down the hall–Communications Specialist. I so wanted that job! I interviewed for it and, after the excruciating pain of having to be nice to others interviewing for my dream job, I was hired. It was a pretty cool job for a 23 year old. I was the editor of Rich’s employee magazine, “Richbits”. I was responsible for content, which usually meant interviewing people in all the branch locations, as well as store 01–Downtown. What this translated into for me was that I could explore every nook and cranny of the Downtown Rich’s and always use the excuse that I was working.

What a building and a store it was! I truly believe one could buy just about anything there. I understood how the term “department store” came to be. There was a department for everything. Jewelry, fine jewelry, kids, men’s, women’s clothing, all that was to be expected in the Store for Fashion. But on the fifth floor SFF (Store for Fashion) was Finale on Five. This was a treasure hunt. All the clothes that did not sell for whatever reason from all the other Rich’s stores would end up here. They would be hung on racks, all smushed together, and priced at, say, half of regular price. Every week or so, a percentage would be taken off the price. We would try to “hide” the designer pieces we wanted so others wouldn’t find them–take a Tahari blouse and hang it in the men’s shirts. It didn’t always work, but it was fun. The Store for Homes had everything else–a Pharmacy, cards and gift wrap, furniture, draperies, interior decorators, books, gifts, china, televisions–floors and floors of merchandise housed under towering ceilings and rambling spaces.

The basement was an adventure. There were several cats that lived down there–I was told by one of the maintenance men that their job was to catch rats. I believed it. Doors opened to forgotten rooms filled with old furniture, mannequins, boxes, and files. It was kind of scary–often I was the only one down there–but it was one of the neatest experiences I can imagine.

Number one in my long list of pleasant memories from working at the downtown Rich’s was the rooftop crossing in between the Store for Homes and the Store for Fashion. There was a door right outside of our offices that led to the roof. The quickest way to the other store was to walk outside, over and down. I would stand at the railing and gaze at the rest of downtown Atlanta that unfolded around me. When Christmas came, they would erect the Great Tree and the Pink Pig in the rooftop space. The ornaments to the Great Tree were the size of basketballs. As occasionally I ducked under a branch, one would fall off, and I’d rehang it with care. Being that close to the Great Tree is still a happy Christmas memory for me.

I left Rich’s and the Communications Specialist job after about three years. Apple had just invented this little box of a computer that ran page layout software from Aldus, and a laser printer that permitted me to print what I designed. I left my job and the magical store for desktop publishing and freedom from the 9-6 routine. But my enchantment, fascination and love for the downtown Rich’s has never left my heart.