Reflections through a Southern Window 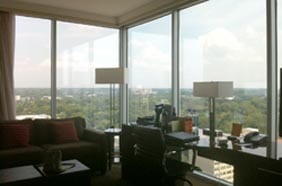 Sitting in a restaurant on a warm summer evening in Atlanta, I idly looked out the window and watched a middle-aged black guy amble by on a bicycle. He had on a white t-shirt and a baseball cap and wasn’t rushing to be anywhere. He didn’t look particularly bothered by the heat or the humidity or the mosquitoes or the potholes. He lazily made his way down the street under the towering oaks and I watched him out of the corner of my eye. It occurred to me that I’d just witnessed a picture of the south. I used to take my southern mind shots for granted, but since I’ve been out of Atlanta so much in places that distinctly are not the American South, I’ve been thinking a lot about the region, my ties to it, and why I developed a love for it.

I was 12 when I moved from St. Louis to New Orleans. St. Louis is conservative with solid mid-western values and a great place to raise a family. New Orleans is wild with unique Southern roots that cross with French and Spanish and Creole heritages. About all the two cities share is the Mississippi River, which really is something. As a kid I would sit by the river in St. Louis and think about Huckleberry Finn and Jim rafting down that muddy, wide, magical causeway. It wasn’t a stretch in New Orleans to sit in front of the same river and imagine Huck’s raft tying up in the back of Audubon Park as he set off to find dinner on the shore.

At first I thought New Orleans was dirty and smelly and the people were weird. My parents bought and renovated an old Victorian house on St. Charles Avenue and we didn’t have a kitchen for three or four months. We ate out every night. I’m sure my parents thought that a treat—after all, one can eat every meal in New Orleans for a year and never go to the same place twice. I didn’t quite see the merit in this endeavor and I ordered meatballs and spaghetti at every single restaurant. Every one. If it wasn’t on the menu I ordered it anyway and always received it. I exhibited such flexibility as a 12 year-old.

After a year or so in New Orleans I started to find the city’s rhythm. I took the streetcar to school and admired the gracious homes that lined St. Charles. I’d sit out on my balcony facing the street and listen to the night sounds: the clatter of the cars and streetcars, the laughter of neighbors on their patios, the drunken shouts of patrons leaving Commander’s Palace. I learned to love dressed po-boys and Dixie beer and staying up late. Most of all I learned to love diverse people and experiences and places and foods. While to this day I like spaghetti and meatballs, I don’t think I’ve ever eaten it in New Orleans after 1972.

I stayed in New Orleans for 11 years, with a short two year diversion to Little Rock, Arkansas when I was a junior and senior in high school. Little Rock was my first introduction to the true south. New Orleans has southern sensibility, but Little Rock is southern to the end of its curly razorback pigtail. I learned about southern women in Arkansas. Southern women speak with a sensuous drawl, smile a lot, and can say anything about anyone as long as they preface it with “Bless her heart…”. “Bless her heart, she’s as big as a house after that trip to Europe.”

After graduating from Tulane in New Orleans, the economy had tanked in Louisiana and there was no way I or pretty much any other college graduate was going to find a job. I had a friend living near Atlanta and he invited me up to check out the city. Really having no other plan that sounded as good, I drove to Atlanta. The first thing I noticed was the massive interstate highway. I remember seeing six lanes of traffic on either side of the median and wondering how I would ever feel comfortable driving in that city.

In many ways Atlanta and I grew up together. Atlanta’s growth was accelerated by the 1996 Olympics. If anyone asks me when Atlanta changed, I answer 1996. After ’96 I could travel internationally and when people would ask me “where are you from?”, I didn’t need to say the state or the country, just “Atlanta”. They got it. And with that recognition came lots of people and traffic and smog and sprawl. But Atlanta retained its intown neighborhoods and mammoth oaks and festivals and blue skies and steamy heat summers. It kept its friendliness and smiles and front porches and sweet tea.

Sunday night I sat on the sofa in a luxury high-rise hotel on Peachtree St. in midtown Atlanta, in a room 22 floors above the city. Our room had two walls of glass facing, oddly enough, my house. I couldn’t see my house because of Atlanta’s trees, but when it was daytime I could barely make out Decatur’s water tower that’s a block from my driveway. The lights of midtown out the other window sparkled and danced in the heat. A few people walked on the sidewalk and a sprinkling of cars made their ways down the street. The city was beautiful and gentle and southern and all grown up, but I could feel its soul 22 stories above its pulse. Atlanta’s soul is so deep. It’s black and white and brick and plantation and confederate and civil and carpetbagger and money and airport and interstate. Atlanta is the capital of the new South. To me, it’s the heart of my South. As I looked at the city, I cried. I cried for what it’s meant to me, for my innocence lost and my wisdom found, for my love affair with the south and with Atlanta. I cried at the thought of leaving it.