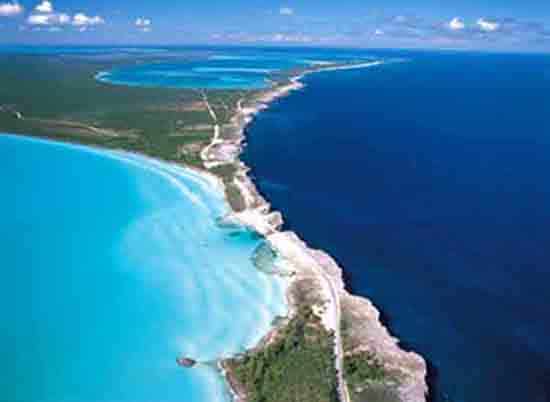 When you’re a kid in the Bahamas without TV or radio, without a telephone and certainly without a computer, you learn to make your own fun. Of course that’s not really all that difficult when your front yard is a beach and beyond that is the crystal clear fantasy land of the Bahamian oceans. This was my world as I spent my summers on the out island of Eleuthera from age nine on.

My brother and I started our explorations with a little inflatable raft, the kind with sides you can sit in and paddle with your hands, not a full blown dinghy but really just a toy. We paddled it around the coral rocks that lined the tranquil bay we called home. The water was so clear, even without a mask it was possible to see conch shells and sand dollars and sleepy rays half-buried in the sand. We saw hundreds of cute Sergeant Major fish, so official with their black and white stripes yet festive with their touch of yellow. My favorite then was the friendly indigo Blue Tang, who always had a smile on his face.

As I grew older, we moved our play area from the placid and gentle Caribbean side to the more tempestuous Atlantic side of the island. Eleuthera is never more than a mile wide, but the difference in oceans on either side is astounding. There is one place on the island that is barely wide enough for a car–it’s aptly named the Glass Window–and from it one can see the turquoise tranquility to the west and the deep blue surf to the east. Playing in the ocean on the Atlantic side is a different experience; it is deeper and rougher but the fish are bigger and more diverse.

By this time we had a better dinghy, or should I say we borrowed better dinghies. Since summer is the off season in the Bahamas, we were generally the only people anywhere in sight. The occasional small boat would be left until winter, pulled far to the top of the beach; we would borrow such boats, always returning them no worse for wear. We paddled out to the reefs which were usually not too far from the beach, but the occasional shark sighting made a boat a wise choice.

About this time the boys–my brother and my stepfather and Billy, a family friend–were introduced to spearfishing. The only kind of spear allowed in the Bahamas is called a Hawaiian sling. It’s sort of a slingshot–it has a wooden handle attached to a long, round thick rubber band. You insert a five or six foot stainless steel spear into this contraption, pull back, and let it go. If you aim well the spear hits a fish in the head and you’ve got dinner. If you don’t aim well, you spend a lot of time looking for the spear. It is against Bahamian law to spear with tanks, so spear fishermen learn to be experts at free diving.

I never could bring myself to even try to spear a fish. Maybe it’s because I’m a Pisces, I don’t know. But I grew up considering the fish as my friends, and it just seemed in bad form to kill one’s friends. So while the boys would be spearing on one end of the reef, I played fish on the other. Playing fish involved finding a friendly fish, almost always a grouper. I would dive down and follow the grouper. It was amazing, the fish just knew I was playing. It would lead me to and fro among the coral and sea fans, waiting for me when I had to surface for air. I could play with one grouper for ten minutes at a time. It generally wouldn’t last for more than that as either he would stray too far or something else would catch my eye. A definite game killer was the appearance of anyone with a spear. My playmate immediately knew a spear was in the vicinity and poof! he’d be gone.

I read an article once where an oceanologist called the grouper the “Labrador Retriever of the sea”. I thought it wonderful that another person knew my secret, that groupers were playful and gentle and fun. Atlanta, where I live now, is a long way from the ocean, and I don’t have groupers in my front yard any longer. My best alternative was to adopt a yellow Lab. I named her Grouper.

← The Fate of Little San Salvador The Power of a Lab →