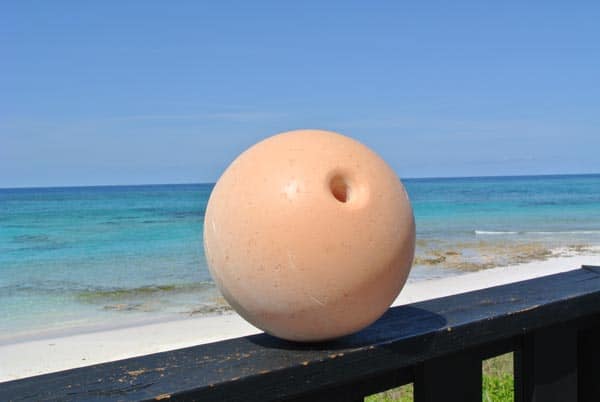 Ankles are healing and today was more like a “normal” day on Eleuthera. I enjoyed my morning half grapefruit and then we puttered around the property. I rummaged through a bin full of snorkels and masks and fins, attempting to find a pair of flippers that would allow my still-tender sprained ankle to enjoy a trip around the reef. I succeeded and launched myself in the crystal clear water. It’s so warm now…April is in full swing. I swam out to the little reef right off our beach. We call it “Potlatch Reef” but surely that’s a tip of the hat to past days.

Potlatch Reef is small but really has a lot of fish for being so close to the beach. Last time out I found the most amazing sea biscuit lying in the sand just off the eastern side. This time I found a pocket of probably fifty fish–the expected Sergeant Majors near the surface, and then in a little cave were yellow snappers, grunts, perhaps the tip of an inquisitive grouper, and surprisingly a pretty large hog snapper peering at me. Fish know when you don’t have a spear…and I didn’t. I dove under and we viewed each other and I guess I blinked first and finally swam away.

Back near shore now and I saw over the water line that Fred had hobbled down to the beach on *his* fractured ankle, accompanied by our four dogs. People and dogs were thrilled to be back on the fine pink sand. We all swam and shook dry and headed back to the house. After an outdoor shower by the path we were feeling warm and positive about what used to be a daily routine but was interrupted and now had returned. Ahhhhh.

Drying on the deck, Fred exclaimed there was a float on the beach. We’d just left there! I looked and sure enough, there was a basketball-sized yellow/orange fishing ball washed up directly in front of Tippy’s. Fred had just come back from Tippy’s with dog in tow, and I knew the restaurant was full of lunchers. I wanted that float! I limped down our deck stairs and did my best to at least appear to saunter next door to the water’s edge. Take it from personal experience, it is difficult to appear casual with a sore ankle on sand. Still, I reached the float and picked it up. It’s plastic, sure, but it’s a nice one…made in Spain, large, and solid. I was afraid to even look at the lunch crowd, thinking that someone might challenge me for my prize.

Back home safely I washed the sand off the float and set it in the sun to dry.