My Love Affair with Pro Football 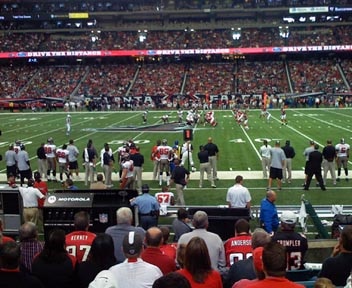 I’ll admit it. I love professional football. I’d say I love the NFL…but I don’t really love the NFL; it is just the machine behind the teams that allows the games to be played. I love the coaches and the players and the intricate choreographed plays. I love the uniforms and the colors and the crowds. I love the competition and the angst and the victories. I grieve at the end of every season. The only reason I like August at all is because football starts again.

Considering how this love affair began, I have to go back to my first recollection of professional football. I lived in St. Louis, and the St. Louis Cardinals moved to the city the year I was born. I guess you could say we were born together. My father had season tickets, and one year–I don’t know when, I was a just a little girl–he took me to a game. Boy was I excited! I got to go to a football game with my Daddy! It was very cold, and the games were played outside at the old Busch stadium. I remember bundling up like I was going to play in the snow, and huddling under a blanket in the stands. Dad’s friends all sat together, and there was a silver flask that was passed around…to keep the adults warm, I was told. I had no idea what was happening on the field, but I loved the big red Cardinal head on the helmets. I was toasty and secure and cheered when everyone else did.

Over time that feeling of happiness associated with football grew and flourished. I moved to New Orleans when I was twelve, and Super Bowl IX was played at the old Tulane stadium in 1975. My stepdad suggested we go, so we walked up to the ticket window the day of the game and bought tickets. They were $20 each. We sat on a wooden bench and watched the Steelers beat the Vikings. I loved the pageantry and I loved the game. I was rooting for the Vikings I think because I liked the name and I liked the color purple.

I flirted with becoming a Saints fan over the Cardinals, but the Saints were really, really bad–that’s the era when fans wore paper bags over their heads and everyone called them the Aints. I bought into everything else New Orleans, but my allegiance stuck with the Cards. Life brought me to Atlanta in 1983, and when the Cardinals flew to Arizona in 1988, I caught Falcons fever. Some friends and I had season tickets at the old Fulton County stadium, ironically a cousin to Busch stadium. Those were really fun games. We drank beer and cheered and got to be friends with the fans around us. We supported a team that didn’t win all that much. We didn’t really care.

When the Falcons moved to the Dome we kept our tickets for one year, then gave them up because we didn’t like going inside to watch football on a glorious Atlanta fall day. I migrated back over time. I may not like the concept of indoor football, but it’s still the game I love, and a part of me was missing when I wasn’t sitting in a plastic seat on Sunday. I went through all the Falcons eras–Glanville’s tickets for Elvis, our run to Super Bowl XXXIII in Miami, the excitement and heartbreak of Michael Vick, Bobby Petrino calling the hogs one day after he bolted from Atlanta in the middle of the night, the heart wrenching loss last night to the Green Bay Packers.

I certainly love the elation that comes with winning. I don’t cherish the depression that accompanies losing. But at the end of every season, win or lose, I miss the games. My family talks to each other more during football season. We generally try to go to a game together. I had the special experience this year of going to a Rams game in St. Louis with my father. I felt like that little girl again under the blanket. Football brings people together, and I think that’s the real reason I love it.