Motorcycling and the Art of Life 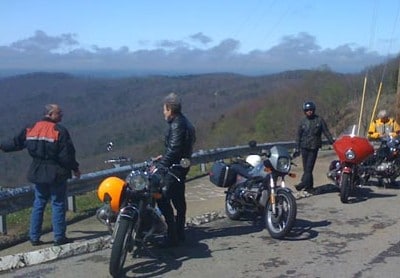 Twenty-one years ago I dated a guy, John, who was really into motorcycles. At the time he worked out of his basement selling vintage BMW motorcycle parts and working on customers’ bikes. I knew nothing about motorcycles other than my Dad had a little Honda 90 when I was young and for a short period of time commuted on a Suzuki. I thought it amazing that John could tell the brand of motorcycle by just listening to the sound of it. I, on the other hand, thought that Harley Davidson was a British marque.

That summer in 1990 I flew out West to join John. He was in his little red pickup truck with an early 1950s BMW R51 /3 motorcycle in the longbed. I flew to Denver and John picked me up at the airport. He had a good friend living outside the city and we visited him at his motorcycle shop, Thunder Road. I thought the name was cool…an homage to Bruce Springsteen. His friend was very welcoming and outgoing, funny and charming. His name was Dennis.

We stayed up in the hills with Dennis for the night. His house was…unique. Only about half of it was finished. The livingroom/kitchen (what we’d now call a great room) did have a roof, although it had plywood as a floor and studs and plywood for walls. I think there were appliances, I don’t really remember. What I do remember was the great time John, Dennis and I had. We laughed and drank and laughed some more. John and I slept outside under the Colorado stars. It was quite a magical time.

A couple of years later John graduated to own an independent BMW service shop and was eyeing the possibility of becoming an authorized BMW motorcycle dealer. Somehow Dennis decided to move to Atlanta to join John in his BMW growth spurt. I wasn’t really dating John anymore but we were still friends and I handled his advertising and marketing. I had just completed the state’s Motorcycle Safety course, was newly licensed, and in possession of my first BMW motorcycle, a 1984 R65LS.

Dennis didn’t know many folks in Atlanta and I was enjoying my newfound motorcycling capabilities, so Dennis started hanging around with me and my other Eurobike friends (riders with European motorcycles). I am convinced there is no better BMW motorcycle mechanic than Dennis. He can fix anything and make it stay fixed. He has a quick wit and sparkling eyes. He has two speeds–“on” and “off”. He made us all laugh. We’d meet up every Thursday night at a little “Cheers”-like bar in Atlanta, the Euclid Avenue Yacht Club. The Yacht Club is about as far from water as possible, but it’s a friendly, diverse place and we could park our bikes out front. We were a pretty closeknit bunch.

At that time I had a friend who was getting her PhD at Georgia State. I was getting my Masters there and teaching too, so we had a lot in common. Her little sister, Amy, had just graduated from college and moved to hot ‘lanta. I got to be good friends with Amy too. Amy is smart, pretty, fun, and has a heart of gold. On occasion Amy would come to Thursday night Eurobike night with me, not because she cared diddlysquat about motorcycles, but because it was a party.

I saw the look in Dennis’ eyes when he first met Amy. While I genuinely liked both of them as people, I didn’t think it a good idea that Dennis date Amy. She was considerably younger and naive compared to him. Dennis was divorced with a daughter. I lectured Dennis (as though it was my place to do so) and told him absolutely positively he could not ask Amy out. Well that was effective on my part. They were married within two years.

Amy and Dennis are different people, but utterly charming with a strong union. Eight years ago they had a lovely daughter, Emily. While Amy climbed the corporate ladder and enjoyed considerable work success, Dennis played “Mr. Mom” and raised Emily during the day. He still tinkered around with motorcycles and other machinery. Together at night and on weekends, Dennis and Amy showered Emily with love and taught her to play and learn her way toward a meaningful and productive life.

This past Friday Dennis and Amy’s Dad were at the NASCAR Experience in Hampton, GA. This was a Christmas present to Dennis and he’d been looking forward to it for a while. They teach you how to drive a race car, and then put you in the car for multiple laps around the track. They’ve done this for a while and it’s replicated across the country. They’ve learned to stay in constant communication with the driver so if there are any bumps in the road, so to speak, they can talk the driver though them.

It was all going fine. Dennis was excited and talking to the guys in the control tower. And then…Dennis stopped talking. Amy’s Dad and the others in the tower could see Dennis’ car gliding to a stop and drifting ever so gently to rest by the wall. Emergency workers were immediately at the car. Dennis had no pulse. They tried to revive him but could not. Dennis had passed away at the age of 58.

In one sense it’s a fitting tribute to how Dennis lived his life that he would leave it while in a race car zipping around a track. Even near death, he didn’t crash the car and he still mastered the machinery. But my heart breaks at the thought of Amy and Emily losing such a vibrant and wonderful person. I too will miss Dennis. His death is a reminder to me that I need to maximize every second on this earth. I want to be the best person I can; I want to make optimum use of my life and help others and use my talents appropriately; I want to have fun and laugh. And that renewed drive in me, I think, is my lasting gift from Dennis.

← Trying to reason with cancer Rational in the Light →