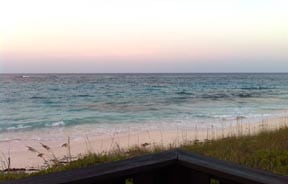 A while back, maybe last year, I was trying to figure out how to attune myself with the universe in order to be most receptive to its ability to meet my needs. Actually that sounds rather pompous and self-centered, so I should also add that I think such an attunement is a two-way street; I must give in order to receive. Anyway, I figured out that the key, at least for me, centers on three qualities: awareness, openness, and love.

This very well may sound a little touchy-feely but at its core it’s pretty simple. I practice being very aware of my surroundings and environment. I listen and see with clarity. I practice openness in the sense that I am open to new experiences and people and try to experience before I judge. And lastly I practice love as in an embracing gentleness for all living things. On my computer is a post-it note on which I scrawled in all caps AWARENESS OPENNESS LOVE. I feel I’ve internalized this and live it everyday.

So with this philosophy I set out for Eleuthera. I didn’t have a plan for what I would do there, other than to think and write. For whatever reason I just knew I had to be there. Although several people volunteered to join me the only person I actually asked was Tracy, my stepsister. We don’t do very many things together and why I asked her I really don’t know. She said she could come for the first four nights and that felt right. I would be alone for the following week.

Although I spent quite a bit of time on Eleuthera in years past, it had been ten years since I’d set foot on the island. Eleuthera doesn’t change much. The stores and shops, few and far between such as they are, were all pretty much still there. There are a couple of new bar/restaurants on Banks Road in Governor’s Harbour. I knew the names of a lot of people but really only knew a couple of them well enough to visit. My parents told me a good friend of theirs was in Governor’s Harbour, a guy I’d heard about and seen photos of forever. They gave me his contact info but I wasn’t sure I’d look him up.

Our first full day on the island, Tracy and I headed south. Eleuthera is a 100-mile long skinny island with one main road that runs the length. We packed an ice chest with cold Kalik beers, threw our snorkeling stuff in the back of my Ford Explorer, and set off. It was a gorgeous day, not a cloud to be seen, and not yet stifling hot. Our windows were down as we zipped along the rutted road. Life was good.

Our first stop was to see an old friend, Clyde Bethel. Clyde is my age and we’d sort of grown up together on Eleuthera when I used to spend my summers there. He now has a farm outside of town where he sells fruits and vegetables, jams and honey, landscaping plants and trees. We parked outside of the small retail stand and exited the car. I was walking into the yard when I heard Tracy talking with someone. I turned around and as coincidence would have it, my parents’ friend they’d told me about was just leaving the farm. He seemed quite nice and I noticed his sparkling blue eyes. We talked briefly and he invited us for cocktails and dinner on Sunday night.

The next couple of days Tracy and I laughed and drove and swam and ate and drank Kalik beers. It was the Eleuthera I remembered. Around every curve was a scene so ridiculously gorgeous that I quit counting how many times I said “wow–that’s pretty”. We saw so many shades of turquoise and blue water that there should be more words to describe them. Just as Eskimos supposedly have 18 words for snow, there should be at least 18 Bahamian words for greenish-blue sea.

Sunday night rolled around and we showed up at Freddie’s house at the appointed hour. I was strangely sort of nervous and I didn’t know why. I felt like I was walking into something important, but it was just a family friend with whom we were going to have drinks. Tracy talked with Freddie the bulk of the evening, which I understood. Tracy was leaving the next day and she actually knew him. I’d only heard of him. I felt his energy though and his warmth and felt very comfortable.

Tracy left the next day. I spent the afternoon and night by myself. I examined my mind, walked the beach and admired the water. I still really had no idea why I was in Eleuthera and I felt a little lonely. I thought about how I’d spent the last two years of my life preparing for this moment. I had scrutinized my life and ended unhealthy relationships. I’d worked with Christopher to understand myself and conquer internal demons. I’d started to write and it seemed a lot of what I was writing was about Eleuthera. I put together a website with a Bahamian feel. I rented a house and a car and got on a plane. I was on Eleuthera now; it was the culmination of everything I’d worked toward. I just didn’t know why. So all I could really figure out was that I’d better write the next day.

The following day I wrote “Rational in the Light”. I’d forgotten my blog distribution list as it was on another computer, so I cobbled one together from my address book with me. My stepmom had given me Freddie’s email so I added him to the list. I drove up to Sky Beach, a close-by upscale restaurant with wi-fi, and posted the piece to my website and sent notice of its posting to my list. Rather quickly I got a note back from Freddie: “Great read. If you want – or need – to come off the hill, you know where I live.” I wanted and needed. That night I dropped by his house before dinner.

This time walking up the ramp to his house I felt nervous again. What was this feeling? It was so unlike me. I am a generally confident person. I felt an electricity, an energy I didn’t understand. Awareness.

We walked next door, sat at the bar and had dinner. I talked to a new friend who had joined us for dinner Sunday night. A woman came in who had recently lost a loved one and talked to Freddie as she drank her drink. It was comfortable. We walked back next door and I asked if I could borrow his wi-fi and sit on his deck to check my email. He said I was welcome to come in, which I did. He said we were both on the island alone so why not hang out together? He wasn’t “trolling for women” and I assured him I was in the same place. We understood each other and were able to move forward without questioning each other’s motives. Openness.

As the rest of the week flew by we got into a routine. I spent my days alone walking the beach, eating at Sky Beach and using their wi-fi, reading “The Sea Captain’s Wife”. One day I wrote another piece about Eleuthera, “Bahamian Idol”. In the evening I’d drive to his house and we’d go eat dinner or to a cocktail party, usually with other people. We talked and laughed and got to know one another, although I think we both felt as if we’d known each other forever.

When it was time for me to leave the island he met me at the airport to say goodbye. I didn’t want to go. As I was about to walk to the plane I gave him a little box and told him not to open it in front of me. In the box was an Eleutheran pink sand coral heart I’d found on the beach. Love.