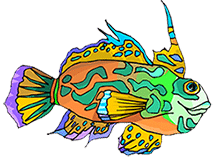 The cruise ship balcony was small and that’s how I viewed the world through the cruise ship lens. How ridiculous, I thought, to be here in Australia and see blinking lights in the dark. I should be a part of those lights…know what’s going on there. It’s the Great Barrier Reef for God’s sake. Why am I concerned about hair color and weight and whether to eat pork or lamb chops?

I looked down at the lit wake by the side of the ship. It was slightly pink, probably not from the ship’s lights but rather from the myriad of stars above. I thought of my options. Sit here and live a safe, boring existence. Or dive.

I dove. I really couldn’t believe I was doing it. OK, really I jumped. They showed us in the staged muster exercise at the start of the staged cruise to hold my nose and step off…pretty much as one does when jumping off a dive boat. So that’s what I did.

The water was cool but not cold. The hardest part was the swirl and wake of the ship. I was pulled under and turned and I gasped and couldn’t breathe. All I could see was the hull of this huge metal beast. I kept thinking of my scuba training forty years ago…if under water and in trouble, don’t panic. Don’t panic.

I’m not sure what happened or how I got free, but next thing I knew I was floating in the water. I don’t think anyone knew I was gone. I was free but then I started thinking of what the cruise ship lecturer said. He was a pilot for a long time around here, and he said that sharks weren’t a problem as long as a boat was moving. Stop and in half an hour, a shark would start nosing around, curious.

So here I was motionless, certainly not on a cruise ship heading northwest at 11 knots. The thought of jumping off that ship didn’t seem so smart right about now. I felt a nudge against my shin. I jumped (although one can’t really jump in the water, but the adrenalin rush is the same.) I think it was a current brushing my leg, but I wasn’t sure.

As I treaded water in what was now a dark wavy menacing ocean without sight of shore, I held little thought for the future. Dumb dumb dumb, I thought. How could I jump off a cruise ship and think it a good idea?

The great thing about salt water is it is buoyant. You can lie on your back and stretch your arms and legs out, sort of like Jesus on the cross. In this pose you can float. I’ve done this all the time in the, and on the, pristine waters of the Caribbean ocean. There the sun glimmers on your face while gentle currents tease you out to sea. I used to lie like that, floating, thinking that’s what I’d do if stranded in the open blue tousled water. And now here I was, lying like Jesus but strangled with waves in my nose and mouth as I tried to breathe.

I thought of the lights I’d seen on the horizon and thought once again of why I’d taken the plunge. It was freedom. It was the lack of someone telling me what to do. I continued to stretch my arms and legs out, gasp occasionally for air, look at the stars, and drift with the currents.