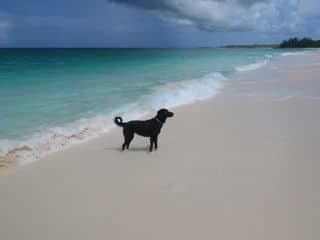 One thing that prevents me from traveling to and enjoying Mexico is the stray dog population. They’re skinny, flea-bitten, hollow-eyed pups that dodge cars in the street as they look for scraps to eat. They drink from those whitish rain puddles by the road and wander listlessly away when approached. The Mexican people seem to have learned to look through these dogs and for the most part ignore them entirely. I’ve always thought it a big difference between the Bahamas and Mexico that Bahamian dogs, in contrast, are healthy and loved. Then again, up until this year it had been a decade since I visited the island of Eleuthera in the Bahamas, and twenty years since I spent any meaningful time here. I’m finding there’s a lot of catching up for me to do.

I say “here” because I’m on Eleuthera now, writing this in a downstairs room just off the beach, a deck over the sand outside my window that plays light games with the sun between its slats. There is a whole Bahamian stray dog culture here, a little of which I knew and a lot about which I did not know. I’ve always known, since I was ten or so, that Bahamian mutts are called “potcakes”. Legend has it that the name came from the dried rice and pigeon peas that cling to the bottom and sides of the pot when cooking peas ‘n rice…a resultant delicacy of sorts known as potcake. Bahamian peas ‘n rice is sort of the equivalent to Louisiana cajun jambalaya. It’s totally ok and encouraged and maybe even applauded to throw into the pot whatever’s on hand…green pepper, tomato, thyme, chicken stock made with last night’s dinner bones. The potcake that clings to the pan is comprised of any and everything and that’s the idea of the Bahamian mutt. Who knows what breeds comprise these dogs and in a sense, who cares. The potcake is more than the sum of its parts.

When I was young I thought that most if not all potcakes were brown with blackish markings on the tail and face, maybe a splash of white here and there. They were skinny with big brown eyes but not particularly sad or abused. I’ve learned now that there is no standard description of a potcake and, unfortunately here like almost everywhere, abuse happens. I don’t want to dwell on the abuse but it’s pivotal to this story so I can’t ignore it. I would prefer at this point to comment on some wonderful grown potcakes I know. My friend here with me has five potcakes from Eleuthera back home in Rhode Island. They range from age 14 to age three, large and black Lab-ish, to medium with long golden hair with matching golden eyes, to smaller and short haired and rather houndish. His daughter has a gentle black and white long-haired potcake and a friend in Connecticut has two more, sisters to two of the aforementioned pups from two separate litters. The dogs are uniformly smart and savvy, loyal and unique. Importantly, most of all they are loved.

Resources on Eleuthera are limited, as are the contents of Bahamian wallets. Dogs, left to their own devices, tend to multiply. In a world of supply and demand too much supply leads to lower demand, and as potcakes become more plentiful there just aren’t enough people or resources to adequately support each dog. There are dogs wandering around without enough to eat. Heartworms and fleas and ticks are common companions. These dogs are survivors, bright and able, but they can’t do much without some help from their human counterparts. Most Bahamians are kind and loving people but that doesn’t mean they can run up to Pet Smart and buy Frontline or duck into the vet on the way home from work and pick up some Heartgard.

Fortunately there is a rescue organization on the island that rounds up dogs for spay and neuter. If the dogs need homes, or if the previous home has not been in the dog’s best interest, they try to find a new home. There is a caring Veterinarian who flies over a couple of times a month from Nassau who spays and neuters and nurses and diagnoses and dispenses drugs. They say it takes a village to raise a child and in this case it takes an island to protect its dogs.

It was two caring women from the rescue organization, Pet Pals, who sent out notice of four dogs they rescued from an inadequate surrounding. The local police accompanied them to a home and they came away with these four potcakes. They’d been roped to trees in the yard. They were skinny. The mosquitoes and ants had chewed away the hair around their eyes. They suffered from malnutrition, their coats were matted, and they smelled like yeast. One dog was chained instead of tied to a tree. Still they were spirited. They were survivors.

My friend Fred responded to the notice. The dog who’d been chained, a gentle black retriever-like potcake, is the sister to his potcake back home. We said depending on the vet’s analysis of her, we would take her once on island. It turned out she was in barely adequate health, but overall ok especially considering the circumstances. She has heartworms, about a six in gravity on a scale of ten. She’s taking a course of antibiotics before she can be treated for the heartworms. Her name is Myrtle.

We flew into Governor’s Harbour last Monday. We unpacked and went swimming and called the rescue folks to say we were here. They brought over a sweet, tentative, skinny, beautiful dog. It was obvious the rescuers cared a lot for her. We all sat on the living room floor and stroked Myrtle. We took her drugs and direction. When they left I think we all had tears in our eyes.

Everything is new to Myrtle. She’s a three year old puppy. She won’t go out the door before you because she assumes you’ll leave her. She doesn’t want to get in or out of the car because that involves change. She’s learning though. The greatest metamorphosis and by far the most fun, I think for us all, is when we’re at the beach. At first she just waded in the water. We’d coax her in and she’d let the clear salt water lap at her tummy, then prance back to the safety of the beach. Gradually she followed us in the ocean and awkwardly paddled to us, her hind legs motionless and her black head barely bobbing above the waves. Finally on day three the sky was dark and the waves were a bit larger than normal. I watched as she ran into the water, all by herself, swam out toward the horizon, and bodysurfed a wave back to the beach. She still isn’t using her hind legs in the water as she should but she’ll build strength and that too will come.

Emotionally Myrtle is magic. She’s a bond to Eleuthera for me and for Fred. She’s a bond between Fred and me. And the biggest bond is forming between Myrtle and the two of us. She is smart and courageous and scared and loving and fun and self-sufficient and needy. She is genuine and she doesn’t manipulate. I’ve always seen those t-shirts and pillows in little gift shops that say “I want to be the person my dog thinks I am”. Well I want to be the person I think my dog embodies.

We don’t know what the future will hold for Myrtle. We don’t know that the heartworm treatment will be successful. We hope to have her back for our six months here starting in December and then home with us for good, but we have to take it a day at a time. It’s a gamble for me, giving my heart to this dog. But I don’t think I have a choice because I know she has no choice.

We did make one group decision. I couldn’t remember the name Myrtle, nor could Fred. Myrtle herself responded to the name, but she never looked that thrilled with it. We played around with some other names but given all the change the dog was already navigating, it just didn’t seem right to start calling her Fifi or something. One day on the beach we were talking about turtles and I saw her head cock. Turtle – Myrtle…they rhyme. She smiled. We smiled. We love our dog Turtle.

← Reflections through a Southern Window Preparing for Irene →