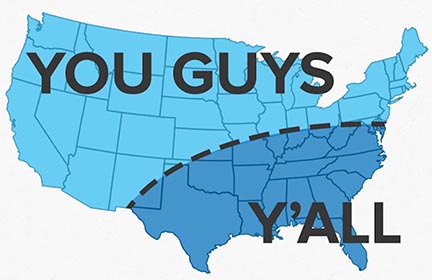 There is so much geographical diversity in the United States. In the last twelve months I’ve lived in Rhode Island and South Carolina, and spent days or weeks in Alaska, Wyoming, Colorado, Vermont, New York, Virginia, Missouri, Georgia, and Louisiana. And of course I’m not even addressing my months spent on Eleuthera in the Bahamas, as that falls outside of the United States. Despite the political differences in the U.S. right now, my fellow Americans (which sounds as though I’m about to make a speech, but I assure you I am not), are quite lucky. We can hop on a plane or into a car and be transported to mountains, beaches, deserts, canyons and so much more without producing a passport or visa. But how do these regional differences affect the people who live there? This blog will examine the similarities and differences of the two American regions with which I am most familiar: New England and the deep South.

I guess the accent differential is pretty obvious. In the South they d-r-a-w-l and in New England they talk veryfastandnasal. These speech affectations mirror the speed at which the residents move. Everything in the South is slow. Try to schedule a workman and be told “well, I may be able to swing by next Tuesday, but we’ll have to see. If I can do it sooner I will but it may be later too.” This is a perfectly acceptable response in the South. In New England, that same workman will tell you, “I’m very busy but I have a one hour opening on Tuesday between 3:00 and 4:00.”

Of course the speed at which residents move and talk is in direct correlation with the weather. Both regions have really pretty times of the year. Fall is lovely and temperate in both places, and spring can, well, come in like a lion and out like a lamb in both the North and the South. But let’s look at the extremes. The deep South gets hot. I mean walk-outside-and-lean-down-to-pick-up-the-newspaper-and-sweat-from-every-orifice hot. And in late July and August and early September, the nights don’t cool down. It’ll still be 84 at 3:00 in the morning, with 98% humidity. It always tickles me in Rhode Island when a day reaches 90 degrees. The state goes into a panic. Buses are free so residents don’t have to walk in the dreaded heat with compromised air quality (the horror!). And northerners make fun of us southerners for not being able to drive in the snow? Ha! And naturally when it’s hot, you move slower (or don’t move at all, or really do what most Southerners do, sit inside in the air conditioning) and, guess what, there we are back at the slow thing.

So I suppose you can guess what the extreme in New England is? Yup. Cold. Dreary gray weather. Snow. Ice. Bundle up and try to keep warm. Two inches of snow will absolutely paralyze a southern city, and grocery stores will have run out of milk and toilet paper within an hour of its forecast. Northerners think nothing of two inches of snow, and really don’t think much of two feet of snow. The snow plows show up, the streets are clear, on go the boots and the parkas, and you’re out the door just like any other day. Trying to keep warm. Moving fast.

Probably the difference I’ve most pondered though and that which affects me the most, especially as a relative newbie in both S Carolina and Rhode Island, is the difference in how people treat other people. People in the South are very open and chatty. They smile at people they don’t know as they pass on the street. They make room for others to merge in front of them in traffic. (OK, this doesn’t happen in Atlanta. But Atlanta is no longer the deep South. It’s just a Big City, which is its own category.) People chat with others in the grocery store. It’s easy to make friends because everyone is so open and nice. But beware! In the South as soon as you turn your back, that nice new friend is likely to say, “Bless her heart, she is (fill in the blank with a negative comment.”) It is perfectly acceptable in the South to completely trash someone, as long as you precede your comments with “Bless her/his heart…” So how long does it take to make real friends? That’s a good question. Years at least. But at least you’ll still be surrounded by happy, smiling people.

By contrast, people in New England are a bit stiff. They are (mass generalization here) well educated and well read and can carry on an intelligent conversation. But it takes a while to really get to know them. They hold their real feelings inside and don’t blab to relative strangers how their child was arrested at 3:00am last night for spray painting the neighbor’s mailbox. They are civil but not open. However, once a New Englander has decided that you can be trusted, that you’re ok, (using whatever standard it is they use—I haven’t quite figured out that one yet), they can be a real friend. The process may take a couple of years or more, but Northerners are solid in their friendship…eventually.

Both regions’ residents with multi-generational lineage are proud of their histories and fierce in its protection. That’s probably true anywhere you go. As I said at the outset of this blog, I’m a newbie to both places. I did spend my summers on Nantucket until I was eight, and I also have lived in the deep South since 1972, so I guess I have some “non-newbie” in me. But whether people drawl or talk fast, make fun of the others for treatment of extreme heat or snow, or are open or stoic, it doesn’t ultimately make one region better than another. I love both for their unique qualities, and especially for their differences.

← Westward Ho! Living with the threat of Covid-19 on Eleuthera →